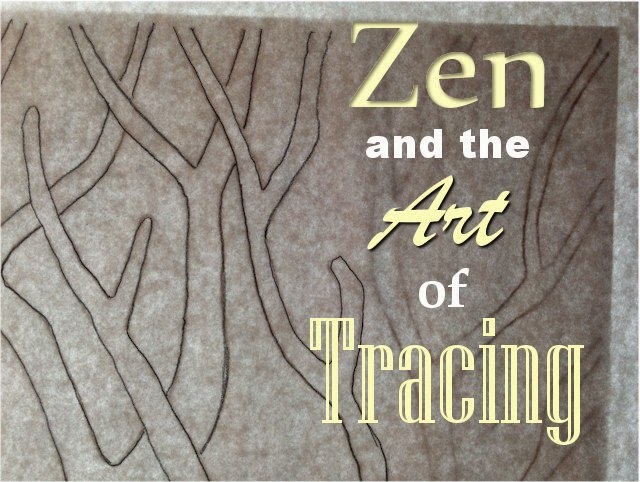 I do a lot of tracing as I create carving patterns. There’s a peacefulness to the process that requires keeping the integrity of a mood. And, there’s a little time travel involved, and a little music too. See what I mean.

I start my patterns from an idea of the overall shape and mood I want to carve.
Yes, tree shapes have a mood.

At least they do to me.

This gnarly tree has hard turns and crooks in the branches. 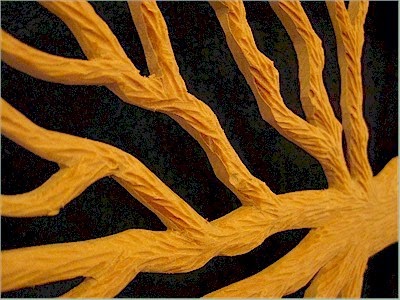 Where this limb has many gently curved branches. It has a flow. 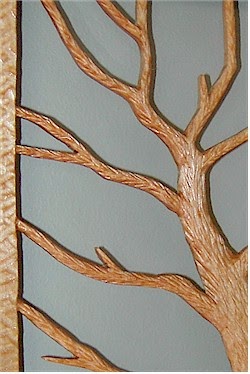 Making the pattern for it was a series of long flowing lines. Whereas with the gnarly tree, each line was short, with frequent turns.

Devil in the Details

When first drawing a full draft, it’s easy to forget the mood of the tree. It could start with flowing branches and end up with lots of interesting crooks.

That’s where tracing comes in.

I trace parts of the pattern that hold the right mood consistently.

Sometimes those are on opposite areas of the paper.

My little light table is the workhorse of this process.

I can stack a few layers of perfect pattern parts together and try different configurations. That’s a lot faster than drawing them all out.

Flipping the paper to start a mirror image on the opposite side of the tree is a neat trick. Really helps keep the tree in balance.

When I have an interesting fit, I slip a clean sheet on top and trace the new grouping.

Michael Hedges is one of my favorite musicians. In fact, he is the only musician I’ve ever seen live in concert that made me want to become a roadie and travel to every city on the rest of his tour. (Since I’m a published composer myself and professionally ran sound for a lot of folks in those days, that’s saying a lot.)

His presence is so peaceful and yet so powerful. Like a big creek.

I remember watching a Wyndham Hill video where he was featured. They had a little quip from him before he went on stage.

It’s a Matter of Focus

I wrote a little about this in Zen and the Art of Scrollsaw Maintenance.

There’s a type of focus where you become one with the line, the blade, and the shadow of the blade. It’s all one thing and you’re one with it.

But tracing is a softer focus. You can think about the line you just made, the line you’re making, or where you want to take the line next.

And that may not be an exact replica of the line being traced if it doesn’t feel right.

Often I notice that I’m drawing with my elbow and wrist locked in a certain position. My shoulder is moving the pencil around the page when I trace. Have you ever seen someone paint Chinese characters? It’s a little like that.

Naturally, drawing from the shoulder affects the flow of the line. It’s a broader stroke than I can make with my wrist.

So, when the flow of a line during the trace feels like it should go a different direction, my shoulder is where that feeling resides.

It’s a little like playing guitar. My elbow does most of the playing. My wrist only gets involved for finesse on a strum or when picking. (If you watch a flamenco guitarist, you’ll only see their fingers move except for the occasional hard strum.)

I go through erasers like crazy. And because I draw such bold lines, after a while I can hardly see if the new lines have the right flow.

Tracing a new draft is a great way to get a fresh start. There are no distractions and I can clearly see any line that breaks the mood.

I’m finished with the first draft of my new carving. I need to walk away for a day or two so I can see it cold. I’ll be looking for anything that is out of character with the integrity of the mood of each element. (There are three in this carving.)

Once I’m satisfied with the aesthetics, then I’ll switch brain sides and look at it from an engineering viewpoint. Since these new carving will be made from plywood, strength is not as much a concern as it is on my single ply carvings. I have to design those so they won’t explode.

Then I’ll be tracing the lines with a blade in my mind, to determine where the access drill holes will be and to ensure that the blade can make each change of direction.

In other words, I stop looking at the carving, and start looking at all the negative space that will eventually become waste wood.

But that’s a focus we’ll save for another day.