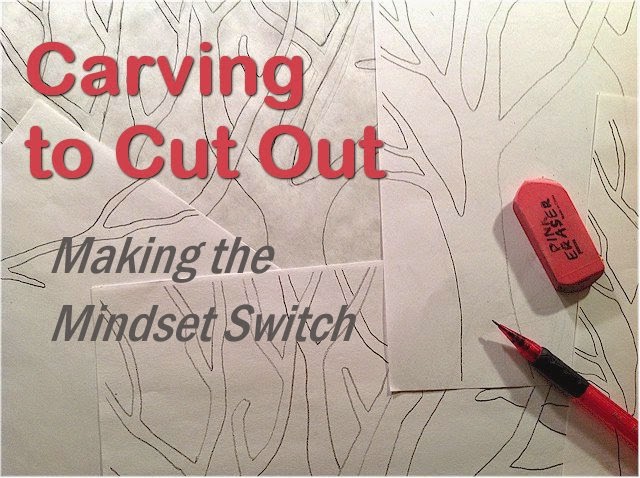 Mastering a new technique takes patience and tenacity. With this current project, even clarifying the vision has become an exercise in shifting my mindset from carving to cut out. I’m not only changing style, I’m changing mediums. And my first draft drawing is glaring evidence that I’m only half way there with the shift.

My aesthetic senses pique on each extreme of the continuum between simple elegance all the way over to complex to the nth degree.

This draft is halfway in between. Well, not quite. It’s elegant lines trying to be complex.

The lines are thick. Every limb and branch has a definite start and end point. And there are no weaknesses in them, meaning little variation in thickness. They all taper in a uniform way.

Each of the limbs has plenty of negative space. Each forked branch has plenty of room to make clean drill holes and turns for the blade.

In other words, each tree is a great beginner carver project.

That’s not what I was after.

Don’t Throw Out the Baby

But, the draft does have value. If I decide to do a book for Fox Chapel Publishing, I’ll need lots of patterns at all levels. So, this one can go in the intermediate project section as is, or each tree can be a standalone beginner project.

I’m particularly proud of the moon in this draft. (Not shown in the picture because it’s still a work in progress.)

The clouds that run across it will be negative space. I’m still working out how to anchor it to the border of the frame. And, I’ll want to cut it out last so I can practice using the waste wood from the negative space of the tree cut outs.

I know where I went wrong with this project. I’m still drawing from a carving mindset and leaving in as much large wood as possible to keep a solid wood blank from exploding.

That requires leaving the whole trunk of the tree in the picture – anchoring its roots at the base and its branches to at least three sides of the border.

And, I gave no consideration to the new material I’ll be working in, which is plywood. That lifts the requirement for so much bulk wood structures in the picture. And the branches no longer need  more than one anchor. It also means that the majority of the branches can float freely, without having their ends touch the border.

In other words, it’s not a delicate piece. The art of it can be more bold and daring. I don’t have to worry about it exploding, or keeping things apart enough to get a carving tool in between at funny angles.

I can have a cut in the wood as thin as the blade itself. And I can have a teeny tiny branch sticking out in the air all by itself, with only one anchor point. But, the most important part, I don’t need a trunk to give the piece girth.

The complexity I crave has nothing to do with the trunk. It’s in the limbs and branches.

Last evening I went down a rabbit hole on Pinterest, looking at art where limbs come into the frame from no obvious source. It’s gorgeous. And it’s inviting. Our minds naturally fill in the phantom tree. In turn, that extends the art beyond the frame.

I live in an established neighborhood where the developers where kind enough to leave as much old growth as possible. In any direction I turn I can count 20 mature trees that are at least 3 stories tall.

There are woods behind the houses on each side of the street with groves of spindly trees punctuated by a huge anchor tree. The little ones make for a pleasant and interesting backdrop. Perfect for the layered piece I’m planning.

It was in the low 60s today, which is unseasonably warm for February. My iPad and I took a short walk around the yard and up the street a bit, snapping images all along the way.

For each shot I tilted the camera up or zoomed in to focus more on the branches than the trunk. I’m only after pieces of the tree. And, it should be fun cropping them even more on the computer to capture just the right framing.

These shots will serve as my inspiration for the next set of drafts. Should be fun to mix different tree frames for each tier of the piece. Right now I’m aiming for three layers. One for a big limb and its branches in the foreground. Then a grove of thin trees in the middle layer. And perhaps the moon and an even smaller, less detailed grove of trees for the bottom layer. Or, perhaps the moon and another limb and branches.