Carving has taught me how to be a better writer and editor. Simply remove everything that is not the art.

Removing the waste wood from my tree relief carvings requires a scroll saw, pictured below. At the top, you’ll see the mechanism that holds the upper end of the thin strip of blade. There is a matching mechanism below the table of the saw that holds the other end. The blade is reciprocated up and down as the wood is presented for cutting. It all works a little like a sewing machine. The blade is like the needle and the wood is like the cloth. Scroll saw cutting is akin to a cross between embroidery and straight line sewing. 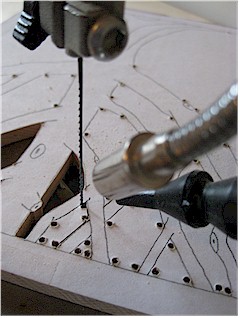 The blade must be kept at enough tension to properly cut, but not so tight that it is no longer flexible enough to allow cutting around curves. There is a knob above the upper mechanism (not shown) that works like a guitar tuning peg. In fact, setting the tension on the blade is a lot like tuning a guitar string. I pluck the blade as I tighten until the desired pitch is reached that let’s me know it is at the right tension. Finding the right pitch requires a bit of practice. I’ve broken a number of blades from either being too loose or too tight.

You’ll notice that there are several holes in each interior section of the carving at every point that has too acute an angle for the blade to turn. The blade has to be released at the top, passed through the hole, and then re-tensioned for each section cut. So, I get a lot of practice at setting the tension.

There are two other elements of the scroll saw shown. The silver element is an LED light that shines directly on the point that is being cut. The black element is a blower that removes the sawdust away from the area being cut. Both are on flexible shafts so they can be positioned to suit. Both become active only when the blade is cutting, which is why you don’t see a spot of light in the picture.

As you can imagine, cutting out the waste wood requires intense focus. I find it to be a rather meditative exercise. When the spot light is on, the blade casts a shadow. Because I have to keep a fixated stare on the point of cutting, at times the line, the shadow, and the blade all become “one” in a fluid dance.

Guiding the wood through the cuts is a little like driving a boat. There’s a different kind of resistance, or lack thereof, when making a turn in a boat than in a car. Unlike the needle in a sewing machine, a scroll saw blade can flex, resulting in a dynamic flow of movements and an exercise in cooperation. In many ways, I have to become “one” with the blade and the wood to make a clean cut.