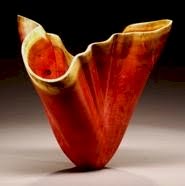 The other night I watched a repeat of one of my favorite shows on NPT. It’s titled Tree Safari: A Sculptural Journey and it tells the story of a trip that world renowned woodcarver Brad Sells made to Africa. He was in search of some special wood called pink ivory.

The massive trees from which pink and red ivory come are extraordinarily slow growing, meaning that they have very tight growth rings. The wood is so dense that it is nearly as hard as a rock.

The trees are protected by the local governments because they are so rare. Special permission must be obtained to purchase and transport the wood, which cannot be removed from the country as a whole log. But, before any wood removal can be done, permission must also be sought from a higher authority.

The trees are primarily located in Zulu country where they are considered sacred. The bark from them is used for medicinal purposes as well.

Brad Sells is a spiritual man. He didn’t go to Africa simply in search of trees. He looked forward to interacting with the people who had tree knowings. When told that he would have to consult with a revered tribe elder and shaman, Brad was honored to be in the presence of wisdom that had been passed down through generations of a people still intimately connected with their natural surroundings.

Credo “Baba” Mutwa is the most venerated Zulu Sanusi in the country and whose permission had to be given for Brad to remove any wood from the area. When asked which tree Brad had in mind, he said that it was one that already showed signs of dying, to which Mutwa replied:

The spiritual implications of those words ring in my mind every time I sit down to carve. I’m carving trees from trees.

I can also look at the fallen limbs and branches in the woods behind my house and see that they have become food for the ground as well as for a multitude of crawly things. Plus, they serve as shelter and hiding places for small furry creatures. I see twigs of those fallen trees scattered among the other trees in the form of bird’s nests that will house another generation of winged things for a time.

So, when is a tree dead?

I have no plans to remove a piece of pink ivory wood from Africa. But I would like to take a safari; a spiritual one to sit at the feet of Sanusi Mutwa for a while and see what else I can learn.