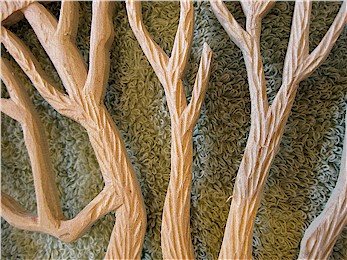 More bark carving. When you look closely, you will find subtle details such as the illusion of a knot (in the bottom right corner) and the directional flow of the bark wherever there is a split in the branch. The same undercut technique that was employed on the roots is also used to help shape these splits. It contributes to the illusion of depth, making one branch seems to go farther back than another.

The ability to cast these subtle shadows is the real trick of relief carving. The brain interprets shadows as a recess and will accept the illusion of more depth where none really exists.