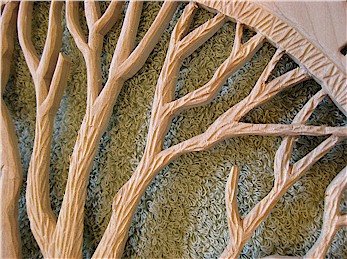 Bark carving detail is added to the smaller branches. Great care must be taken to keep the bark flowing with the lay of the branch while angling the gouge to make a smooth cut that doesn’t go across the grain any more than necessary. It is important to make some of the strokes go over the edge. This significantly contributes to the illusions of depth and roundness of the branch.

These small branches are the weakest part of the piece, especially those that are not fully anchored, such as the one in the lower right. To avoid applying too much pressure to these areas, the gouge must be kept razor sharp. It is honed on the leather strop every five strokes.