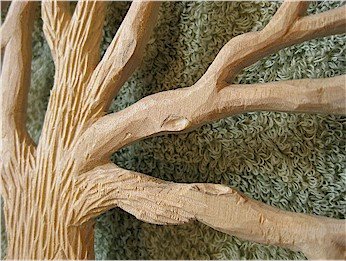 Before fully carving a limb, detail is added to the know area. This can be done with micro carving gouges, but is generally more precise using a rotary tool with a very small, round bit. The edges of the hole part of the know will be feathered out to make it look weathered. A stop-cut is made around the outside of the knot. This shallow, single-line cut helps prevent a gouge from carving through the knot when cutting toward it during bark carving.

On the lower limb, you can see the effect of cutting across the grain or cutting into section that has loose grain. The wood tears slightly. After the bark carving is finished, areas like these will need to be smoothed with the rotary tool on very low speed using a needle shaped bit. It will basically act as a precision micro-sander. This tool is also used to smooth the area around the stop-cut and blend it with the rest of the limb.