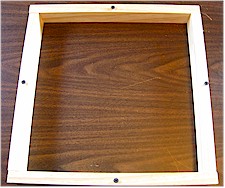 Now that the bark carving is finished, it’s time to put on the first coat of oil. But first, a suspension frame must be built to allow the carving to be oiled on all sides simultaneously. Since the carving is 11×11 inches, the frame is sized to allow about ½ inch clearance on all sides. The interior of this frame is 12×12 inches and is made from 1×3 pine stock. Drywall screws are placed on the topside, but not screwed all the way in. This will allow the carving to be strung across the frame in suspension.

Next, the carving is prepared.A staple gun is loaded with 3/8 inch staples and the wire guide is set in the active position. This will allow the staples to be firmly secured and leave enough room to insert wires for attaching the carving to the suspension frame.

Since so much material has been removed from the carving, it is far too weak to insert the staples while standing upright. The carving must be laid flat, with one side near the edge of the bench and held in place by pressing down firmly from the top. Great care must be taken to exert enough pressure with the gun to secure the staple, but not so much as to crack the carving.