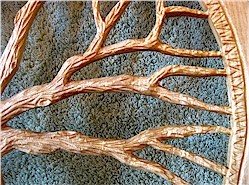 Danish oil is applied to the carving. It takes several light layers. The raw wood really drinks in the first two coats, which can be applied the same day. After that, each coat must be allowed at least a day to soak in before the next coat can be applied.

Here you can see that the oiling process helps deepen the illusion of shadows created by shaping the limbs and varying the depth of the bark carving. 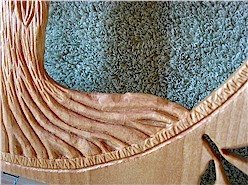 It also gives the same illusion of depth to the roots and helps distinguish one from another. Since the wood has just been oiled, it has a slight sheen to it. That gloss will dissipate as the oil soaks into the wood.

Below is a picture of the carving strung to the oiling frame. Several coats of oil have now been added. Notice the rich honey-brown color the birch wood is taking on. 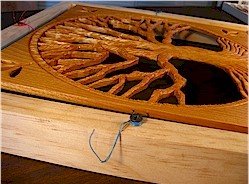 Suspending the carving in this type of frame allows it to be oiled on both sides simultaneously. It also lets the carving dry properly between coats.