Another Heartwood Art carving will soon be featured in Woodcarving Illustrated. To celebrate, a new Follow My Carving series is on the way. This time I’ll be using standard picture framing instead of making my own. 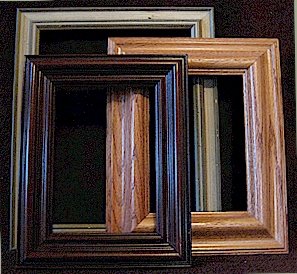 There are a lot of great old frames with “character” just waiting to be picked up on the cheap at a yard sale then recycled into a work of art. The ones in this picture were collected by my good friend, Connie Weaver, who owns S & S Framing here in Nashville. She has been very generous with her time in helping me figure out ways to use standard framing for an upcoming instructional feature for magazines that will publish next year.

She gave me this collection of frames that will be used for a few smaller carvings she’ll dispaly in her gallery. I’ll be creating those before the end of the year.

But, the next carving on the drawing board is another big tree. It’s wonderfully gnarly with lots of turns and crooks in the limbs plus bunches of knotholes. The wood for it should arrive soon. Del Craft hand-picks all the blanks for my tree carvings. He’s in Colorado and is sending me some nice birch and soft maple.

Check back here on the blog often, or sign up for the RSS feed to be notified when I start the next series and watch the tree being made from start to finish. This is one of the few carvings that will be available for purchase in the 2009 series.