To celebrate Heartwood Art carvings being featured in upcoming issues of Woodcarving Illustrated and Scroll Saw magazines, the “Follow My Carving” series was created to give you a an insider’s view on how the art is made. This Gaia carving was requested by my dear friend who kindly took the pictures that will be featured in the magazines. 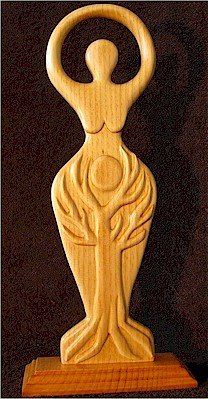 She’s finished! Several light coats of oil were hand-rubbed onto the surface giving it a soft sheen. The base was cut from the same stock as the carving. The tiered edges were created with one pass through a single router bit. It was rubbed with the same oil, but an oil-based pigment was also applied, giving the distinctive color.