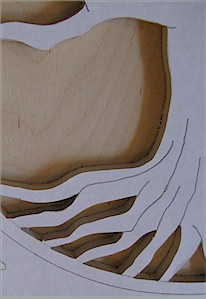 The root system has been cut out as have the two bigger pieces on either side of the truck.

The lines coming up the trunk from the roots will be cut into the blank before the pattern is removed. These will be carved using a special under-cutting technique that will create a dimensional aspect to the root system. This will help give the illusion of them going around the base of the tree.

To make some of the roots appear to be in the background, their height will have to be lowered in a stair-step fashion. Since the blank is only 3/8” thick, great care must be taken in removing enough wood to achieve the effect without making that part of the piece too fragile.

The next installment will show the stop cuts.