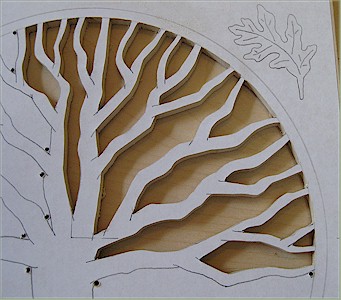 The waste wood has been removed from this quarter of the carving. It’s preferable to remove the smaller sections first. Leaving the largest sections until last helps retain the stability of the blank while it is being worked. It took over an hour to remove just this much wood.

Since wood comes from round trees, solid blanks tend to bow as sections are removed. Choosing the right wood and grain as well as proper architectural design of the pattern is critically important for this type of project. If these two factors are not addressed, the blank could bow to the point of exploding into pieces.

Most scroll saw artist don’t have to take these factors into consideration because their blanks are usually made of thin plywood, which will retain it’s flat shape regardless of how much wood is removed.

For carving purposes, solid wood blanks must be used, but they are specially made from two smaller pieces of wood that have been joined at the center. All of the carving blanks used by Heartwood Art are created and hand-selected by old-world craftsman Del Craft, owner of Del’s Woodcraft based in Colorado.

In this picture of the pattern you can see the outline of the outer circle as well as the oak leaves that will be carved in shallow relief into the triangular corners between the circle of the tree and the outer frame.

The next installment will show the exposed root pattern for this gnarly oak.