The bark carving is finished and the final cleanup of the carving is done. It’s time to start the oiling process. I’ve made a square frame that will allow me to oil both sides of the carving at the same time and allow it to air dry on both sides. The first step is to place staples in the sides. This stapler has a wire guide setting that leaves a gap instead of inserting the staple flush. The carving must be laid flat and a little downward pressure applied while the staple is being inserted. Don’t try to do this with the carving standing on end or it may crack.

Small wires are inserted through the staples. The carving is placed in the square frame and the wires are wound around screws on each side. 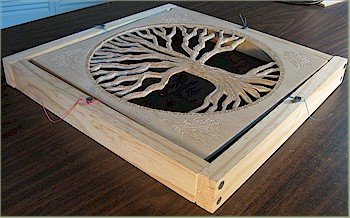 I usually start by oiling the backside first. Be sure to oil the outer edges. I use Danish oil because it gives a nice honey brown glow to the wood and does not leach out over time like boiled linseed oil can do. I used to apply the oil with an artist’s brush suitable for oil painting, but have since found that a standard acid brush used to apply flux for welding and such works just as well and is far cheaper. The oil is applied in thin coats. The first one is absorbed rather quickly. If I apply it in the morning I can usually apply a second coat by early evening. It usually takes about four coats in all.