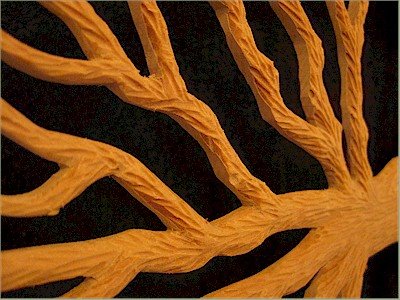 Bark carving is fairly easy, but takes a lot of patience and a soft touch, especially on the smaller branches. A consistent direction must be maintained to give a realistic look. I generally start at the base of the trunk, where it meets the roots, and carve straight up, turning the direction gradually when I come to a limb.

It’s necessary to make some of the strokes go a bit beyond the edge, but great care must be taken to protect the tool in this process. The edge of a micro-carving gouge is somewhat fragile. I always carve with a piece of soft wood under the carving. A plywood blank made of birch serves well for this purpose. If one of those stabbing strokes pierces the blank, little damage will be done to the top of the gouge.

I usually put downward pressure on branches when I’m nearing the end of them. This gives extra support and keeps the thin wood from breaking when I make an angled stroke. Care must be taken not to stab the thumb that’s applying the pressure. Whittling thumb guards can help, but I keep a box of bandages on hand, just in case. I’ve rarely done a carving that did not requires some sort of blood sacrifice, tiny as they may be.

Before I started the bark carving, I created a few knot holes. I didn’t make them as pronounced on this carving as usual because it is already very busy with all the twists and turns of the limbs.

Elbows where the branch takes a turn of direction are great places for knotholes. I simply left the area high when giving it the original shape and then used a round ball bit on a rotary tool to make the hole. It’s just a little deeper than the bark carving and will cast enough of a shadow to distinguish it as a hole.