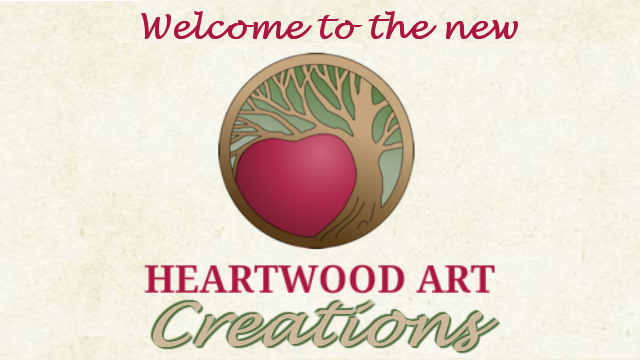 I’m rebranding Heartwood Art and taking it in a whole new direction.

I hope you’ll follow me on this journey of turning a hobby, and its website, into a real woodworking business venture, and a whole lot of fun along the way.

What Happened with the Carvings?

I started the Heartwood Art site in 2007 as a way to share my carving hobby with my family and friends all over the country. 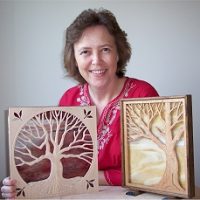 I never dreamed that a magazine article writer would pick me up for a featured writeup!

My carvings and I first appeared in Scrollsaw, Woodworking, and Crafts in 2009.

That led to Fox Chapel Publishing, which is THE biggest name in all woodworking books and magazines, asking if they could feature me in their 2010 Fall Edition of WoodCarving Illustrated.

That led to a paid tutorial in one of the magazines.

And that led to being featured in a Russian woodcarving magazine, and so on.

Then I Was Sidelined

All of this was happening around the same time I was doing lecture tours after my first book had been featured in Publishers Weekly.

I was also working a fulltime job as an electronics engineer in field service, meaning I was on the road a LOT.

That didn’t leave much time for hobbies, but I was making the time to keep this publicity ball rolling!!

Unfortunately, I had a shoulder injury right in the middle of all of it. Seems there was a little too much bone and not enough space in that crowded place, and the extra bone was cutting into things and doing damage.

That put an end to all carving for four months while it fully healed.

I had also been running a side business of creating sites and helping folks do well with theirs through teaching, consulting, and site services.

That business suddenly took off a few months after I recovered from the shoulder surgery and it required all the spare time I could devote to it, as I meant to quit my day job and make it my full time living.

I eventually ended up working two full time jobs, seven days a week, for the next several years to make my dream come true.

I had to let all hobbies go while I devoted the time to the new business venture.

On top of that, I only had a carport and a spare bedroom to do any woodworking, and that severally limited the seasons when I could cut wood and make messes. Unfortunately, those didn’t coincide with the little bit of downtime I had from either of my two jobs.

So, the carving hobby just came to a halt and I let the site go fallow.

I was so sad to lose all the momentum of going big with the carvings. But I’m so glad I was able to make a success of BlogAid and quit my day job.

I did some wood art in 2015. It’s the Seaweed Tree series of posts.

But other than that, I had done nothing with the site or the hobby.

Then, I sold my house that was too big for just me and the dog, and not laid out well for my new lifestyle. I have recently purchased another home that has a huge garage plus a 500+ sq ft art room.

And now that I only have one job, I have time for a hobby again, and the space to do it.

But, I want to do way more than carvings.

I want to create big wall art, plus build things for the house, like a hall tree and a bench for the office.

And to do those things, I need to build a woodshop. I also need more, or newer woodworking tools.

But right now I want to do posts on building out everything I’ll need in my woodshop, like a new workbench, plus tutorials and reviews on the tools I’ll be using, as well as sharing what inspires me.

And since I’ll be expanding to bigger wood art, I decided that I needed to slightly rebrand the site.

It will now be Heartwood Art Creations.

You’ll see the site itself start to change over the next few months. In fact, it will have a new logo and new totally new look by summer, I hope.

But for now, I’m antsy to get going with building the shop.

And I want to share that journey with you.

You’ll be able to get the inside skinny and backstory on my projects as they happen.

I’ll be reviving my Pinterest boards when I have completed projects to showcase. (And that will be soon!)

And, I plan to start a new YouTube Channel, as I’ll have lots of tutorial videos, and a whole lot of fun stuff to share as well.

I’ll keep you posted on when that goes live.

You can also subscribe to Heartwood Art News  and you’ll see projects in progress as I make them.

I plan to have a build series on each project, just like I did with the carvings. I think it’s a lot of fun to watch a project progress, and lots of my carving followers did too!!

I’ll be blogging about the business end of converting this site from a hobby into a money-maker over on BlogAid, if you want to follow progress on it (and learn a lot about DIY site ownership too).

I hope you’ll join me in the fun as I make this new journey!!