The left tree of this 2 layer piece is complete. I used alder and it has some interesting characteristics and challenges to work with on the scroll saw.

For the rear of the 2 layer Seaweed Tree piece I wanted a slightly darker wood. Alder looked like a perfect mid tone. Not as dark as cherry, but enough of a contrast to the birch tree that will be on the top layer to give the whole piece some extra depth.

I’m used to working with birch and maple for my solid piece carvings. And the birch plywood I scrolled for the right tree had the same feel to it as I cut.

It cut so fast that I had to turn my blade speed down, twice!

In fact, it cut so much easier that it made me wonder if I had put my blade in upside down on the birch piece. With a double toothed blade and old eyes, that’s not a hard thing to do. 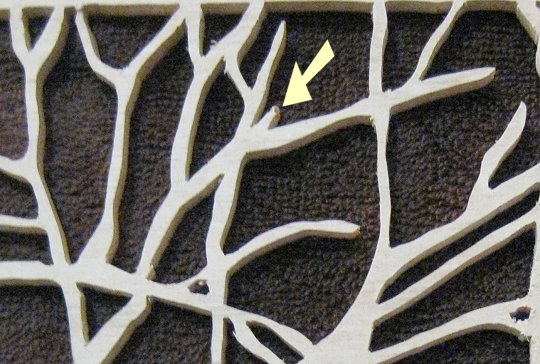 Yep, I had one limb break. It was a short branch, only anchored in one spot. In this piece it looks natural, so I left it.

That type of branch was not particularly weak on the birch piece. But alder has a lot of give to it, even as plywood.

I found that pretty amazing. And distracting.

I had to be super duper careful handling the piece as I cut and as I handled it to take the blade in and out of different sections.

With a great blade, you don’t really push the wood through. It’s more like just presenting the wood to the blade to be cut.

With alder, I had to be careful that I didn’t push at all, and that I just more or less guided it so that I was constantly presenting the line of the pattern to the blade.

Hold On and Hold Down

I also found that I had to keep more of my hand pressed flat on the piece as I cut. A double-toothed blade can produce more vibration and kickback, making the piece jump up from the table a bit.

Even as easy as this wood was to cut, the vibration was still present and I had to hold tight to keep even more limbs from breaking. 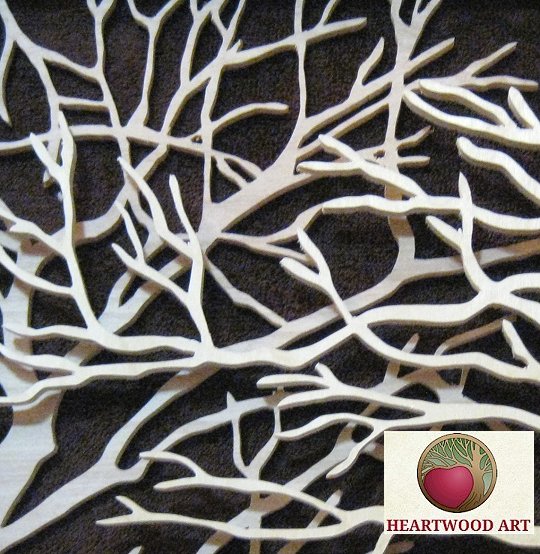 For wood tone and contrast, alder was definitely a great choice to compliment the birch. That’s hard to see in the sneak peek image above, but when the woods are oiled up or stained, the contrast will become much more evident.

I’ve laid it out both ways. With the birch on top and then the alder on top. To my amazement, it looks great either way.

Sanding Will Be Tricky

Now that I’m finished cutting, I’ve got a bit of cleanup to do on both pieces. My usual sanding methods won’t work. I’ll have to come up with a more delicate way of doing it for these two pieces.

I have a nice, small, orbital sander. I think a very light touch with this will do the trick. It will be easy to keep flat and level to the surface, giving a uniform sand.

For cleaning the inside grooves and angles, I’ll probably do most of those with the scroll saw, and maybe use a single-tooth blade. Or, I may just be able to clean cut it with a few scrapes from an X-acto knife. But I’m concerned about putting any pressure on the joints and breaking more limbs.

The final stages of this project will be to figure out how I’m going to space them a bit apart from one another. And then how I plan to hang it.

And then it will be time to either oil or stain both pieces and do the final assembly.

I’ve already got some ideas about how to put it all together and I’ll share that with you in an upcoming post.