Before the paper pattern is removed, several stop cuts are made with a carving knife and gouge. These are special cuts that help define areas and stop carving strokes from going through one area into another.

To give the branches dimensionality and help create the illusion that they are coming forward, short cuts are made where they change direction from the main limb. These areas will later be undercut, which will add to the illusion. 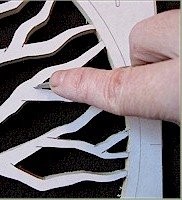 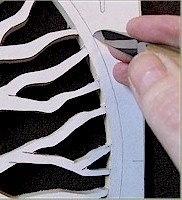 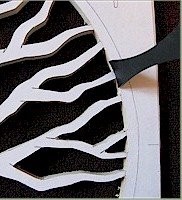 The outer circle frame of the tree is also outlined with the carving knife. This cut will later be enhanced with a small carving gouge. The space between the tree and this outline will be decoratively carved. This outer circle serves a purpose beyond mere decoration. During the tree carving phase, this part of the blank usually suffers from nicks and scratches. Carving a decorative border into this area hides the damage. The outline of the corner leaves are also cut with the carving knife.

Stop cuts are made at the end of the branches with a large gouge. Notice that the rounded shape of the gouge is similar to the curve of the circle. By pressing the gouge straight down, the stop cut depth is easily controlled and will have the same curve as the circle border.

Now the piece is fully prepped and ready for carving. At this point, there are about 10-12 hours of work already in the project. Nearly half of that was just the scroll saw phase, which included drilling the holes and removing the waste wood.

The next installment will show how the backside is prepared.