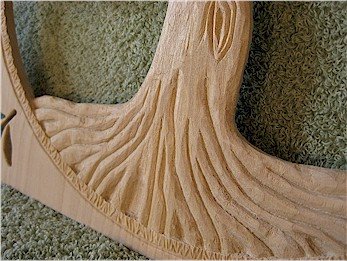 The same detail treatment is given to the roots as was used on the wood spirit portal. A special undercutting technique helps cast shadows that differentiate one root from another without causing a wide gap between them. This results in three distinct layers emerging from only a 1/4 inch thick piece of wood. When the final oil is applied, more if it will gather in the crevices between each root. This will result in making the shadows even more pronounced and contributing to the illusion of depth.