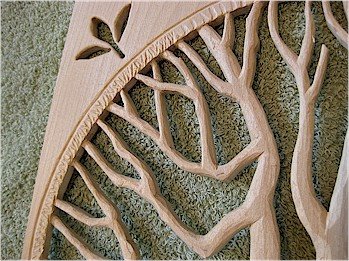 The first detail carving I add is to the outer circle that provides the illusion of an ornate frame or border and enhances the shape of the tree. This area is carved first because it requires turning the piece in different directions to work with the grain of the wood. Sometimes this requires the cut to be made toward the tree. Any nicks to the tree can easily be dealt with once the bark carving begins.

This photo also allows you to see more of the underlying structural carving on the limbs, which gives them shape. Very little wood is removed from the smaller branches because doing so would make them weak. Near the edges, the majority of the wood will be removed during the bark carving phase.

You might also notice there are only a few crossing limbs. They are very difficult to cut and even more difficult to carve. Where they are placed has as much to do with structural integrity and ability to cut as with aesthetics. It’s a keen balance between function and fashion.