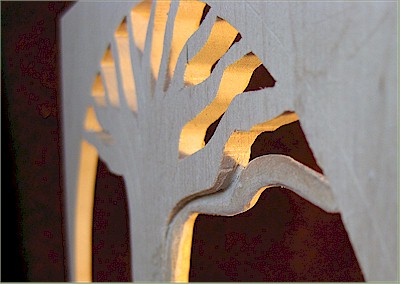 A special undercutting technique is used on the inside edge where the roots meet. When viewed right-side-up, it appears that the roots are actually coming from behind one another. This is because the undercut casts a shadow on the root below, giving the illusion of distance.

The edges of the entire root are then rounded and meet with the rounded edges from the backside. The final step is to use short carving strokes at slightly different angles. Doing so adds low and high spots along the length. These break up the straight carving strokes and give the shape of the root character.

In the next installment, the roots are shaped into the trunk area.