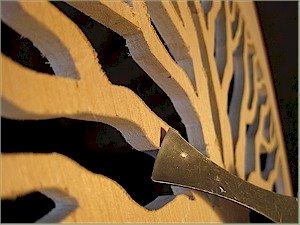 A shallow gouge is used to round over the edges of each limb. It is preferable to make two or three shallow passes instead of one deep pass. Care must be taken to not put too much pressure on the smaller branches or they could break. Because this is on the backside of the carving, great accuracy is not important. The point is to round the edge so a square edge cannot be seen from the front.

More is carved away from the larger limbs and less from the smaller branches or where they meet the edge of the border. Leaving more wood in these areas keeps them from becoming too fragile.

A little less than half the thickness of the branch is carved away. The extra depth left on the front side is needed to carve detail into those areas, especially on the smaller branches. The edges of the border will not be rounded and will remain square on both sides.