Now that the back edges are rounded, it’s time to start shaping the front. I always begin with the roots because they require the most depth. The outer roots will have the deepest recess. Determining that depth affects the shape of the trunk and is why it must be addressed at the beginning. The first step is to deepen the stop-cuts between each root. A carving knife is used to go over the lines several times. 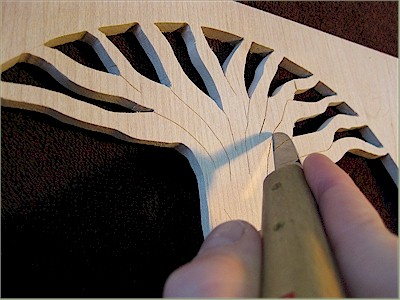 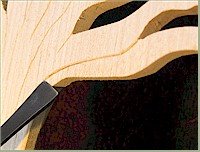 The outside root that lies on the opposite side from the knothole in the trunk has the deepest recess so, I start with it. The edge of a shallow gouge is placed next to the stop-cut line and the wood is shaved off the root in a level manner. The stop-cut is again deepened and another layer is shaved away.

After three or four passes, the depth of the shavings are gradually sloped from the trunk area to the end of the root. This gives the illusion that the root falls behind the tree. After several more passes, waste material is only removed in the middle section where the two roots meet. The reason for this is to avoid weakening the smallest part of the root where it attaches to the border.

The process is repeated until 1/4” of the root has been removed from the deepest part of the slope. In this picture you can see an edge-on view of the slope as it graduates from right to left away from the trunk area.

In the next installment, the root is rounded using a special technique.