Now that the carving is oiled, it’s time to move on to finishing the frame. The pieces have been cut to size and interior grooves have been routed to a depth of 1/8 inch. These will securely hold in place both the carving and the sheet of stained glass that will go behind it. Careful placement of these grooves is tricky business because so many factors must be considered.

First, enough depth must be left in front to have a little interior frame face before the carving begins. Second, enough space must be left in the back to give enough frame for a wall hanger to penetrate the frame enough to be secure, but not enough to hit the glass. (Wall hangers on carvings with glass are optional, but not usually requested by clients.) Third, enough space must be left between the grooves to allow the base feet pieces to be screwed into place. This space also yields just enough distance between the carving and the glass to give the illusion of even more depth to the piece by allowing the tree to cast shadows on the glass.

Now it’s time to do the stinky stuff. To stain the frames, I made a couple of hangers, pictured here. I got the idea from a banana hanger. The same technique used on the carvings is employed here. Staples are placed in the ends of the pieces and they are strung top and bottom to the hanger on the left. This holds them in place while all surfaces are stained. 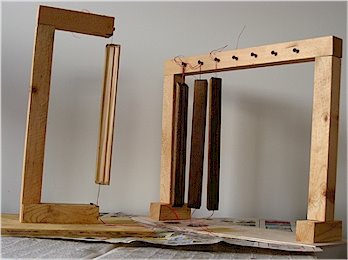 When finished, they are hung from the top from the hanger on the right and allowed to dry fully. The carving is left in the suspension frame used to oil it while a very thin coat of clear lacquer is applied. This type of sealant is necessary; else the oil would leach out over time and dry the wood to the point of becoming brittle. The lacquer also gives a wee bit of sheen to the carving that catches light on the highest points, giving the illusion of even more depth in the valleys of the bark.